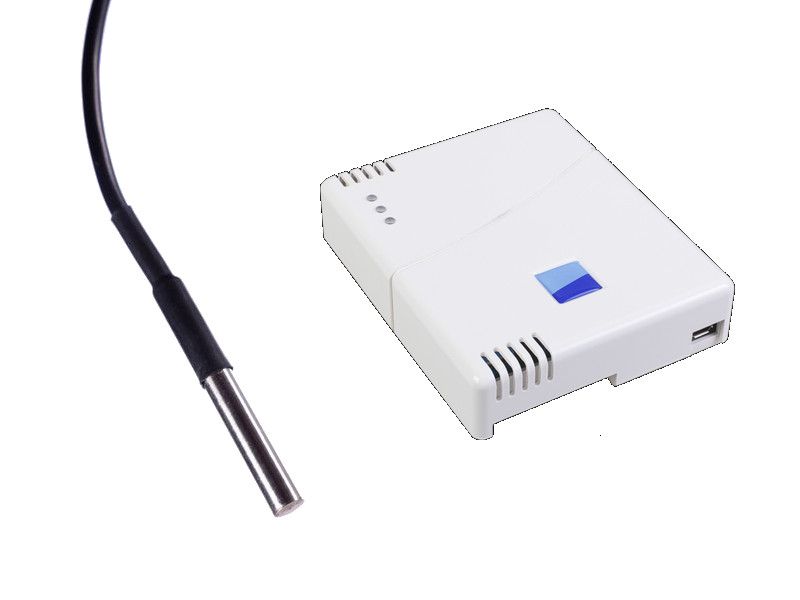 The S4hPro is currently only available for iOS.

The S4H-TMC-00 temperature sensor represents the new S4H Pro sensor family. This sensor use the new S4hPro portal and a separated cloud. The new portal makes sensor activation easier and, using the online portal, you can view and export the measured data.

The S4H-TMC-00 temperature sensor enables you to measure the ambient temperature using two 1-wire probes with a 2 m cord (one probe is included in the package, another one has to be purchased separately). The sensor can be used as a single temperature probe or as a thermostat with two adjustable limits for each probe. The temperature data from both probes are sent to a cloud using Wi-Fi and home AP every 5 minutes. If you use the sensor as a thermostat and the temperature drops below / rises above the limits you previously set, the sensor sends a notification outside the defined schedule. The information from the cloud is sent to your smartphone where you can display it as numbers or in a chart using the S4hPro application. You can use your smartphone to set up and modify the view and limits you use to control the temperature.

TMC-00, a probe with an extended temperature range, enhanced accuracy and the ability to export the measured data. Powered by a 5VDC micro USB.

Was launched presale of new product S4H-TMC-00. Thermometer with extended range, new application and a separate cloud designed especially for applications with a need to record and evaluate the record

Our products family gets a completely new dimension. It was launched portal application IF-THEN,which allows you to create simple conditions and on its creat interaction between sensors and wifi-relay